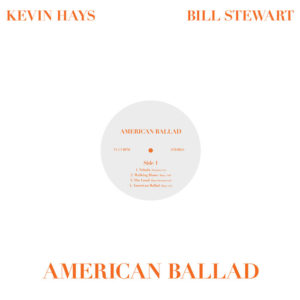 They usually play together as a piano trio, with Doug Weiss and Scott Colly on bass.

I have to admit that I am not too impressed with Kevin Hayes as a pianist, but I love Bill Stewart’s drumming.

I think his drums stood out in a good way in each of his groups: the Maceo Parker group, the John Scofield and Joe Lovano quartet, Pat Metheny’s trio, and Michael Brecker’s solo album.
I think it can be said that he participated in albums that can be considered the peak of each artist’s career.

Especially his drumming on “Trio 99 → 00” and “Trio → Live” with Pat Metheny and Larry Grenadier was my ideal and most desired type of drumming to hear, as far as jazz manner drumming is concerned.

Ain’t No Funk In Iowa

Speaking of Bill Stewart, I’d like to introduce a great episode with James Brown when he was just starting out.

Stewart was in Maceo Parker’s group in the 1990s, and Parker took him on an HBO special after James Brown was released from prison in 1991.

Maceo is a great player and a great band leader as well. The gigs were mostly funk, with just a little swing-based jazz thrown in. The band also included funk legends Fred Wesley and Pee Wee Ellis as well as Larry Goldings and Rodney Jones.
As a result of being in this band, I was involved in an HBO special with James Brown, right after he got out of prison in 1991. Rehearsing and playing with James had me on the edge of my drum stool. He asked me,” Drummer, where you from?” I said “Iowa. He replied “Iowa!… Ain’t no funk there!”

Being a duo album

Well, the important thing about “American Ballad” is that this album was not newly recorded in the first place, but was originally recorded on only one day in 2015 and released 7 years after it was recorded.

I wonder why it was released after such a long salted period, I couldn’t figure it out from the web articles.

In recent years, due to the pandemic, there has been an increase in the number of small-group albums, such as duo and solo albums. For example, Sylvie Courvoisier/Mary Halvorson “Searching for the Disappeared Hour” (2021).
With that kind of environment, perhaps I thought, “It wouldn’t be unnatural to release them now.

Not only jazz, but also rock, pop, and R&B usually have “bass” and “drums” sounds, and a duo-like formation without drums or bass tends to be seen as “irregular.

For example, if there is no bass player, as in this “American Ballad,” does the lack of bass sound give the impression that “something is missing in the music”?

But when I listen to “American Ballad”, I don’t feel that “something is missing”.
I often listen to Indian music, but most Indian music is a duo of a melody instrument and percussion (tabla), and maybe that is because I think that is normal.

This “American Ballad” seems to have been almost entirely improvised, but there is no sense of avant-garde, and Kevin Hayes’ very beautiful melodic phrases and Bill Stewart’s drawn-out jazz drums are very impressive.

The performance is 5-10 minutes long, but it is more like a series of phrases pieced together than a cohesive piece of music.
There are parts of the song that sound like pauses, which is refreshing.
(It may be just a coincidence, but I think this is also a part of the “Indian music” style.